“There are many strange guys in our class.”

You should have heard such a phrase once or twice.

But usually, once you actually try to meet them, it’s not as big of a deal as you heard. In any case, this is something obvious, after all it depends on the personality and the way of thinking ー that is to say, things that have to do with the inside.

And then, even based on this, I still dared to think.

There are, many strange guys, in our class.

“Picchan, where is the actual spot!?”

I asked as I continued to run at full speed on the road by the riverside while being showered by the strong sunlight of the summer.

The person who answered with a carefree tone contrary to her words was my classmate who was near my right shoulder.

A visage that still had trace of childishness, soft hair, long and slender limbs, she was really lovely.

It was a girl measuring around twenty centimeters. What’s more, she had insect-like wings growing from her back.

“Really, this man does nothing but bring trouble.”

Spat out hatefully the other classmate running beside me.

She had beautiful silver hair extending until the area around her waist, and her well-ordered features were not losing to a Hollywood actress. That alone created a mismatch in her uniformed appearance, but it wasn’t that unnatural if you thought she was an exchange student from a foreign country.

… That is, if she wasn’t wearing armour and hadn’t a longsword hanging at her hips.

Said the last one, out of breath as she accompanied us.

This breathtaking beauty equaled the charm of the Goddess Venus appearing in textbooks.

She wasn’t small, and wasn’t equipped with a weapon or armour, so compared to the other two she looked like a typical high school girl.

Well ー That is if you excluded the fact she had pointed ears impossible for a human to have.

“A trouble caused by our students should be dealt with everyone in our class. This is the mission of us who were assembled by fate, and this is our bond.”

Said the classmate owning a sword as if it was obvious. Thereupon, the pointed ears classmate objected.

“Bond or whatever, I don’t know but, I don’t think, it, it should be something, obligatory!”

“Don’t say such a trivial thing. What a narrow-minded woman.”

“In, in the first place, the elf tribe isn’t concerned, by this world. Can’t I, just go home!?”

“The new volume of a manga I was looking forward too was just released!”

“Classmate or manga, which one do you think is the most importantー”

“No matter how you think about it, it’s manga! No matter what the other choice is, it’s manga! Even if an incident happens before my eyes, or if someone is in danger, or even if a flustered old woman can’t cross the road, it’s manga!”

“Who isn’t concerned by this world!? What is this completely dyed person saying!? Also, go help the old woman!”

“What do you understand!?”

“I don’t need to understand such a thing!”

Because the two were going out of control, I waved my hands and stopped them.

“You too, Picchan, don’t say something akin to pour kerosene in a fire!”

I warned her, but the little girl ー Picchan just spun and danced.

I stopped my legs, wiped my sweat, then I ran down to the waterbank. Thereupon, the guys who were waiting on the river beach all turned they head together.

The guys who talked unanimously were all students in the class I belonged to.

A guy with a face similar to a snake, a gel guy with an unstable shape, a guy with the appearance of a wolf, a guy who was extremely short with a beard a high school student isn’t supposed to have, a giant guy who seemed to be made of stone ー et cetera, et cetera.

Their only common point was that they were all wearing the uniform specific to our school, aside from that their appearances were greatly varied. Not a single one was, like me, from this world.

However, I wasn’t shaken anymore. Various things happened and I became used to it.

Pushing my way through everyone to advance ahead, I finally arrived at the cause of the trouble.

There, an uncommon situation was unfolding.

“You… Seems like you do whatever you want in my territory. Want to be beaten to death!?”

A person ー or rather, a beast was picking a fight with a threatening voice.

A giant body with black scales, a log-like tail, and a face with a strong jaw and fangs making you think of a crocodile.

A creature well-known in games, manga and light novels.

However, he was wearing the stand-up collar school uniform.

Being threatened by the dragon, the opposite side ー based on their hair style and attire, you could more or less call them delinquents too ー were trembling violently to the point it was almost pitiful. That’s natural. If it was me, I’d already be crying.

“If you didn’t have such an intention, why did you start a fight with my guys? You’re messing with me, aaah!?”

“I-i-i-i-it was just a sudden impulseeee! This is the wallet we took!”

Prostrating on the ground while bowing their heads vigorously, the delinquents presented what they extorted.

“It won’t end with just giving back what you took. Aaah? Should we add a little compensation!?”

“Hiiiiiiiiiiiii!” “W-we’re going to be burntttt!” “I don’t need half of the world, so please forgive meee!”

The delinquents were frightened, huddling together.

Clapping my hands intensely to appeal my presence, I attracted the dragon ー Ragnia’s attention.

Ragnia who turned his head glared at me with sharp eyes, but noticing the other party was me, his expression softened slightly.

“No matter how you look at it, it doesn’t look like it’ll end peacefully. How do you plan to proceed?” 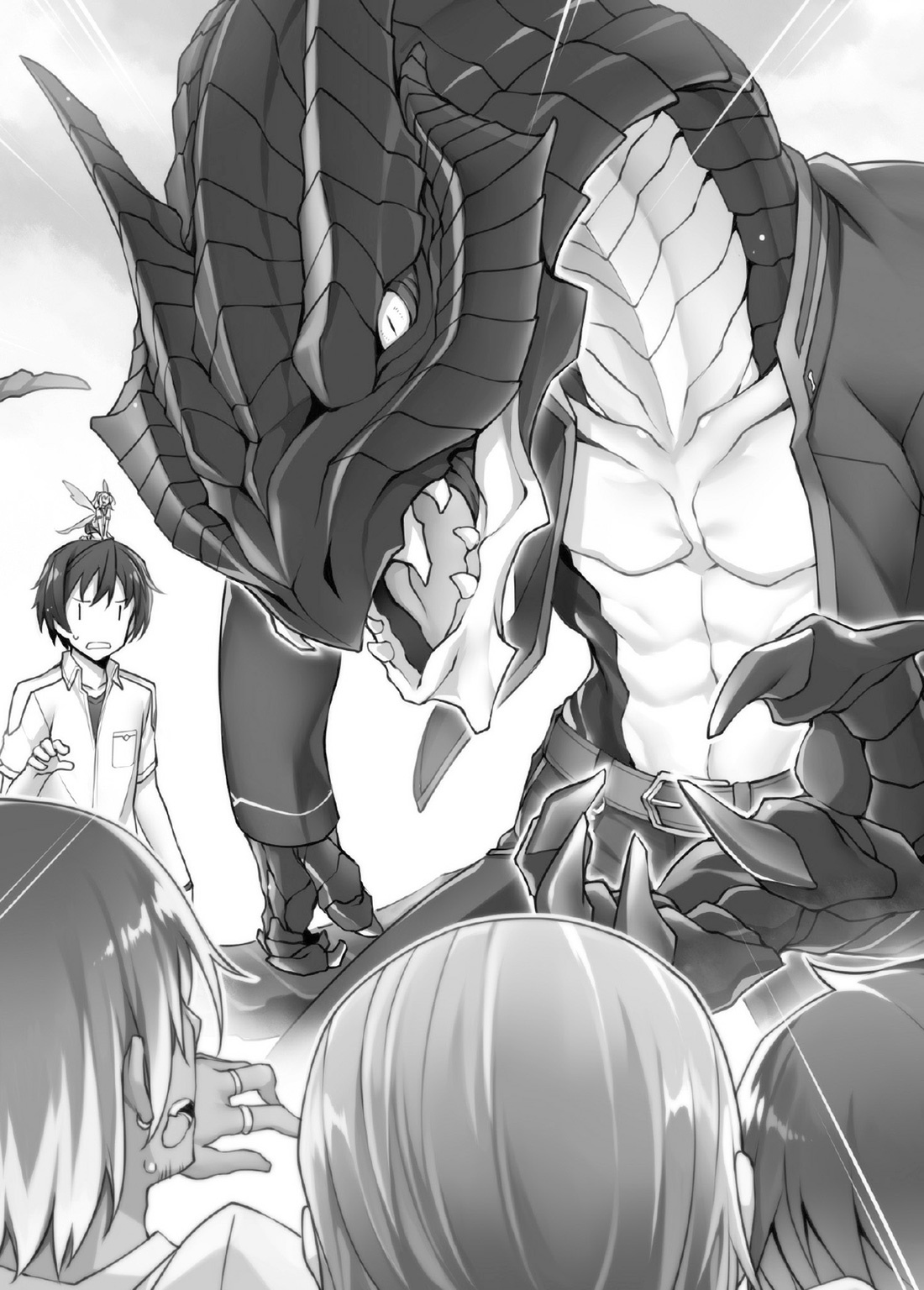 “That’s what I thought! Stop! They seem to be reflecting, so forgive them!”

“Aah? Don’t say a stupid thing like that. Then, something like tearing them up with my claws is fine, right?”

“No it’s not! It doesn’t look like a compromise at all! OK! Class president! I’m the class president, so obey! First of all, calm down, okay!?”

As I tried to calm him by showing my hands, Ragnia clicked his tongue.

Ragnia’s body became wrapped in light. His height shrunk before our eyes, and before long his appearance changed.

What appeared in this place was, while having a little hateful look, a high school boy you could find anywhere.

“You guys! Be thankful to Mamoru. Next time you do something like that, I’m going to crunch deliciously on your bones, aah!?”

Threatened by Ragnia, the delinquents’ faces turned pales, then they fled hurriedly.

“You’re going too far Picchan” Well, a part of me agreed with her, though. “… Anyway, it’s good that we somehow settled it.”

Feeling relieved, I turned around.

Perhaps everyone was relieved from the tension as they were all chatting pleasantly.

Looking at it again, it was a really incredible lineup, but that may be why they were oddly on good terms.

In addition to that, there were many troubles like earlier, but in a way or another I was enjoying myself too.

The Special Class Composed of People from Other Worlds… Aka, Itoku.[2]

This extremely special class was probably the only one in the world.

And the one gathering them was me.

It was the work of Yakuma Mamoru, the class representative.

[1] Her characteristic is to always end her sentences by “desu wa”, and I don’t have an idea for an English equivalent.

During the entire chapter, I translated iinchou as Class Rep instead of Committee Chairman, then Class President when Mamoru’s talking about himself, and the last one as Class Representative instead of Head Class Representative. Translating as I read, I’m not sure if he’s the head representative of all the classes, or just his. So for now I’m going with the assumption it’s just his class, but I might come back and modify the terms if it turns out he is the head representative of all the classes. This note will disappear when I’m sure of the correct terms.